EASST pledge to match funding in organisations time of need. 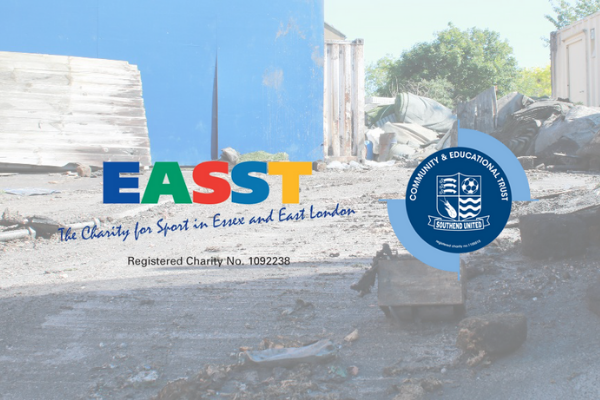 Posted at 03:40h in Community News, Requests for Support by Jamie Langstone
0 Likes

Essex and Southend Sports Trust (EASST) have agreed to match donations made by the public up to the sum of £25,000 (including Gift Aid), in a bid to help re-build Community Corner.

Southend United Community and Educational Trust (SUCET) had worked hard before and during the pandemic to build a facility that was set to be used seven days a week as a community facility. Close to £100,000 had been spent on the area of the car park which suffered severe fire damage earlier this month. The money had been used for levelling off and relaying foundations, painting and treating fences, and gym and electrical equipment.

The trust had already launched seven initiatives in the now ruined area including gym sessions, traineeships and schemes to tackle loneliness and mental health issues. The trust hope to raise at least £50,000 to enable the necessary repairs to take place after plans have gone up in flames.

“We recognise the work Southend United Community and Educational Trust do and how they are a major community asset. I implore people to dig deep and support the organization in their hour of need.”

Promise and perish – Images of Community Corner before major improvements and after the destruction of the fire.

Since making its first grant in 2003, EASST has been supporting SUCET every season. The Trust made an earlier grant of £40,000 in winter 20/21 to assist programmes delivered within the local area and has now contributed £413,000 in total.

All at Southend United Community and Educational Trust would like to thank EASST for their continued dedication and support to the local community.

The ‘Community Corner re-build’ JustGiving page can be found here.