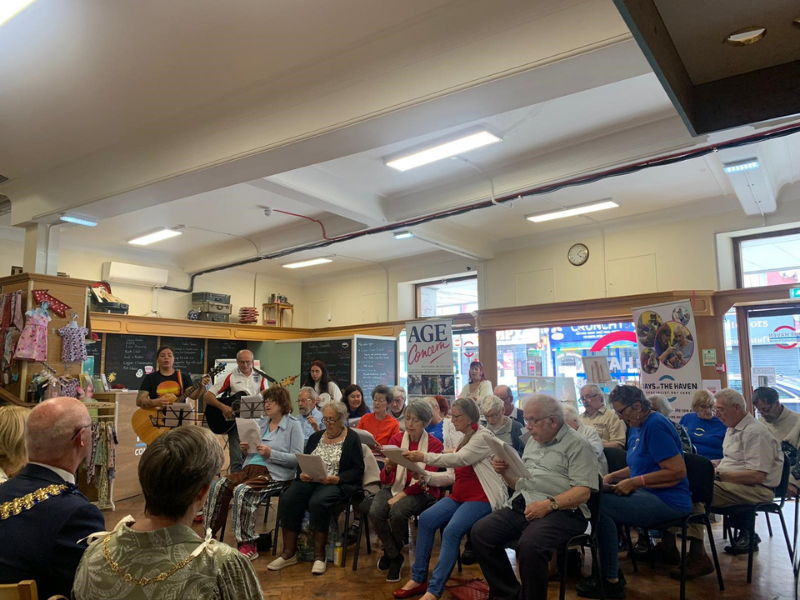 Posted at 09:17h in Positive Stories from Across Southend by Jamie Langstone
0 Likes

The concert was part of project funded by Arts Council England and worked with local musician Val of Musicality – Therapeutic Music Interventions C.I.C to create and join together an elderly persons choir and a choir formed from the Dementia Day Centre clients who have spent months rehearsing for their community showcase and celebrate the Platinum Jubilee.

The choir performed 15 songs in total including tunes like, We Will Rock You, Congratulations and Return to Sender and were accompanied by musician’s Val, Flavia and Martin. The crowd were also treated to a performance from Hub regular, Graham who played Blue Spanish Eyes on the keyboard much to everyone’s delight. The choir also surprised the audience by learning sign language to Singing in the Rain.

Representatives from the council including local councillors and the Mayor were in attendance as well as other supportive charities and community groups, friends, family and carers. Souvenir CDs were available to purchase on the night for a donation, raising over £100 for Age Concern Southend.

Elizabeth Smith, Community Engagement Manager said, “It was amazing to see this project come together. Both choirs have worked so hard. There were many comments from friends, family and the community about how lovely it was to watch – especially seeing our Dementia Clients up there enjoying themselves.”

Peter from Shoebury Residents Association attended the concert and gave the following glowing review, “It was not only about the singing, it brought us pleasure seeing their faces, hand interpretations and the excitement shown by the choir and audience was just heart-warming. The audience, they were joining and singing along.  When they sang “White Cliffs of Dover”, you could see this meant a lot to so many members of the choir.”

Our Day Centre Clients have also enjoyed a recent Jubilee party, with thanks to Wenzel’s the Bakers, Southend for food donations. And the building has been decorated with over 76 metres of knitted red, white and blue bunting which members of the public had handmade and donated.

Elizabeth continued, “It’s fair to say that we have truly enjoyed celebrating the Jubilee with our clients and the wider community.”